The Mission of UUAMP is to develop and support the ministry of membership
through collaboration and professional development . 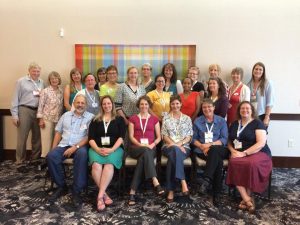 UUAMP is comprised of about 110 members, both paid and volunteer, serving congregations with membership as one of the main components of their ministry. We also welcome UUA staff and the heads of the other UU Professional Groups to join us in supporting our mission and growing Unitarian Universalism as part of shared ministry.

There are many benefits of joining UUAMP!

You can fill out the membership application to become a member today! 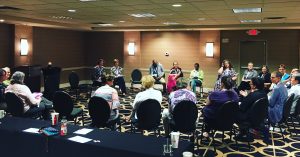 In June of 2010, 10 people volunteered to be on a steering committee to start the work of becoming a UUA related association for Membership Professionals.

Establishing UUAMP as a professional group

Since our first Annual Meeting and inception at General Assembly in 2011, UUAMP has been very active in promoting shared ministry and collaboration with webinars, book discussions, workshops for regional gatherings and General Assembly, and a certification program.

UUAMP is run by an elected Board of Directors as well as a nominations and audit committee.

In 2015, we opened up membership to all passionate about the Ministry of Membership, both paid and unpaid. 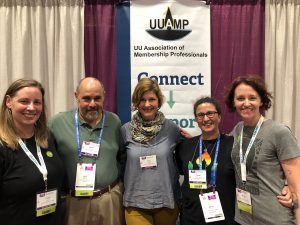 Covenant of the Board of Directors

Our work together springs from our mutual passion for membership work. Upon that foundation we build this covenant.

Covenant of the Board of Directors

Our work together springs from our mutual passion for membership work. Upon that foundation we build this covenant.

Tina Lewis serves as Director of Membership and Engagement at Unity Temple Unitarian Universalist Congregation in Oak Park Il. Tina joined the staff at UTUUC in 2010 after many years of volunteering in the religious education program.  She has served in various roles on the board of UUAMP over the past six years and is excited to be part of its continued growth and evolution. In her free time, she enjoys spending time with her family and friends, traveling, and being outdoors as much as possible!

Caron is a graduate of the University of North Carolina at Chapel Hill, where she met her husband, Steve. Their son, Keegan, lives and works in the NC Triad,  daughter Catie is a recent graduate of UNC-Chapel Hill, and daughter Josie is a rising senior at UNC. As full-time Membership Manager of the Unitarian Universalist Fellowship of Winston-Salem, Caron maintains the member database, works with the Membership Committee on programs for newcomers and members, and supports the Fellowship's vision to work boldly and deeply for justice.

Peggy has been the Director of Congregational Life at the Unitarian Universalist Society since 2016. She oversees programs and classes for visitors and new members, works with Membership Associates to support member engagement, supports the work of the Publicity Team, leads a Wellspring group, helps engage members in programs of the larger UU movement, does strategic planning for new programs and community engagement, and fills in other ways as needed in the life of the congregation.

Peggy previously served as Minister and Assistant Minister of several United Methodist Churches in Michigan. While there, she served on staff and as President of the Board of Michigan Interfaith Power and Light which helps religious congregations address climate change and save energy.

Peggy grew up in the Chicago area, and went to University of Michigan where she earned a degree in Social Change. After working with college students in New Hampshire for two years, she attended seminary in Washington, DC. She currently lives in Coralville, Iowa with her partner, Sarah Ross, and their three cats: Butter, Confetti, and Dulci. Peggy enjoys Scottish fiddling and dancing, reading, cooking, and sewing. She also enjoys visiting her two sons and a daughter-in-law, who live in the Upper Peninsula of Michigan and in Syracuse, New York.

Ashley is the Congregational Life Coordinator at the UU Society of Fairhaven in Fairhaven, Massachusetts.

Ashley came to the congregation in the fall of 2017. She has held several roles at UUSF, at first taking on a very part-time role in the nursery before becoming the church’s Office Administrator and later the Congregational Life Coordinator, her current position which includes both administrative and membership-related duties.

Ashley is passionate about continually working toward broader inclusion and welcoming across all offerings at UUSF. Ashley has enjoyed working on the church’s yearly welcoming renewal efforts, revamping and creating church promotional and educational materials, and during the time of COVID-19, creating engaging, fun, and informative online programming. It is important to her that members and visitors of all ages, abilities, and needs feel seen, so she prioritizes forming connections and fostering a culture of inclusion.

When Ashley isn’t at UUSF she works in her community as a freelance writer and a teaching artist. Her work has been featured in local print magazines as well as online publications. Ashley has worked with several local after-school and homeschool organizations to create classes based on magazine writing and creation, creative writing, story time and crafting, and more. For many of these courses, the goal is to promote the utilization of the arts in fostering creative self-expression and mental well-being.

Ashley loves coffee, used books, and road trips (in better circumstances). Right now she is enjoying spending time online with her friends and family, and in-person with her fiancee, Paige, and their pack of four-legged family members.

Nicole (she/her/hers) has served as Membership Development Manager at East Shore Unitarian Church in Bellevue, Washington, since 2015. She previously worked at a church in Columbus, Ohio, as their Director of Communications and also worked as a morning show news producer. She has a degree in Mass Communications and Social Media from Ohio State University and is a Buckeye through and through. In her free time she enjoys going to the beach with her husband, Shaun, and spending time with her two cats, Kittie and Meeps.

Garnett (she/her/hers) is the Director of Congregational Life at The First Unitarian Congregational Society in Brooklyn.  She was hired as half-time membership coordinator in 2009, a job that expanded every year until 2017 when the position was made full-time with additional administrative responsibilities. As a member of the congregation, Garnett served on more committees and task forces than she can remember including as Board President and then chair of the most recent minister search committee.  Garnett has two grown children, Joseph (25) who currently lives in Nigeria and Katie (30), a nurse who lives with her husband and two adorable sons, Simon and Micah, in Plattsburgh, NY.  Garnett steps away from work to do Yoga, take morning walks with her dog, McKenzie, and play bridge.  She is thrilled to have an opportunity to serve UUAMP and its mission as a member at-large. This is what Garnett looks like when she’s on her 5th Zoom call of the day!

Born and raised in rural East Texas, Sharon Thompson was privileged to be a full time wife and mom to daughter, Shana.  Once her daughter graduated from high school and was pursuing her own dreams and Sharon was single again, an entire new world of opportunity opened.

With a Master of Education degree, Sharon held a variety of education positions at the local, regional and state levels.  In addition to Texas, opportunities arose in San Francisco, Ca; Ketchikan, AK; and Thibodeaux, LA. Along the way, she served the Solano/Napa Habitat for Humanity affiliate as Executive Director for 2 years.

Sharon landed in the airline industry and spent two years as a flight attendant with a private international charter company. Traveling the world, spending 20 days every month in the blue skies with destinations unknown was fun and exciting; but with the needs of family taking priority, Sharon landed in Dallas, Texas.

Unitarian Universalism came Sharon’s life after she moved to Dallas. She served First Unitarian Church of Dallas on staff for 7 years in the part time positions of Congregational Life assistant and Director of Membership; currently serving full time as Director of Membership & Hospitality with the additional responsibility of Data Base Manager.

Janine served as the Director of Membership + Welcoming Ministries at Unitarian Universalist Congregation of Phoenix for two and a half years. In 2019, she transitioned to the Executive Director of UUJAZ, the Arizona State Action Network.

With a passion for justice, a skill for relationship-building, and a background in curriculum development and facilitation, Janine is excited to explore the intersections of Membership and Social Justice. She will co-facilitate the membership track at GA 2019, "A Radically Inclusive Pathway to Membership."

When not passing out tacos to protesters at the 4th Ave Jail, or meeting with community leaders over vegan Horchatas at the Coronado, Janine loves to build her patriarchy-smashing muscles at Barre class, and snuggle with her two kiddos, Vivienne Grey and Ramona Drew.

Mandy (she/her/hers) is the Administrator & Bookkeeper at the Unitarian Universalist Church of Chattanooga. Shortly after relocating to Chattanooga, Tennessee, in the summer of 2017, Mandy joined the staff of UUCC, excited to use her skills in administration to help promote UU values. Prior to that she spent several years in the non-profit sector, helping run one of Louisiana's oldest and largest domestic violence agencies. She is excited to get more involved with UU professional organizations, like UUAMP, and to continue using her skills to support the good work happening in those spaces.

Judy (she/her/hers) serves her small congregation, Tree of Life Unitarian Universalist Congregation, in McHenry, IL as their Congregational Administrator and Membership Assistant. Judy is a rare fourth generation UU and loves sharing what we have to offer. Judy launched and coordinates Faith Forward in her congregation and works closely with her husband, who chairs Membership Development, to welcome newcomers and enrich offerings for the congregation. She was pleased to meet some of the wonderful members of UUAMP at her last General Assembly while working the AUUA booth and enthusiastically joined UUAMP. She is thankful for the shared knowledge UUAMP offers. As Congregational Administrator of a small congregation, Judy is the bookkeeper and works closely with the congregation's treasurer.

These bylaws were amended, voted on and approved at our annual meeting on June 23, 2020.

This Code of Professional Conduct was voted on and approved at our annual meeting on June 23, 2020.